Officially called Potrero Grande, but known locally as Ollie’s Point, this famous surf spot first popped onto the map when it was featured in the surf documentary Endless Summer II. But Ollie’s Point has a lot more going for it, than a mere mention in one the surfing world’s most popular films.

Indeed, surfers come to Ollie’s Point from around the world, to experience one of the smoothest right-hand waves in the region. The waves here are steep and fast. Old-school long boarders love this wave, especially because Ollie’s Point has a sandy bottom, making it highly suitable for intermediate surfers seeking a challenge.

The best time to surf Ollie’s Point is at low tide, during a solid south swell – usually, just before, during, and right after a full moon.

How to Get There

Ollie’s Point is in Santa Rosa National Park, which makes it inaccessible by car or truck. In fact, this surf paradise is completely isolated, with no food, water, ATMs or camping available. The only way to get here is by boat, most often on trips leaving by boat from Playa Del Coco.

The only boat leaving directly from Tamarindo to Ollie’s (in 90 min) is with the company Mermaids and Surfers on 34feet boat (https://www.mermaidsandsurfers.com).

There is many options to set up surf trips to Ollie’s Point but most of the time it means to drive to Playa del Coco, then buy the tickets and find a boat on the spot that will take you there. The standard price for a boat ride (up to 5 people), for a full day of surfing, is around $360+.

The only company that included everything (breakfast, lunch, tickets and departure by boat from Tamarindo directly to the surf spot) is Mermaids and Surfers.

Come surfing on the Nicoya Peninsula, and you’ll see signs for Witch’s Rock all over the place. And no wonder – it’s one of the most popular surf spots in Costa Rica.

On a good day the beach break waves are perfectly cylindrical and five-second tube rides are common. Believe it or not, the water can be cold here, so a 2mm wetsuit can be very helpful.

In winter (may to November) the wind conditions are unpredictable, so it’s better to check the forecast report before to go.

Depending on the time of the tide to choose to go to Ollie’s or to Witch’s first.

There is a very rough road that leads to Witch’s Rock, but it’s extremely hard to drive(you need a good 4X4!). There is a camping area on the spot where you have to pay the ticket to have access to the national park .

Again, Mermaids and Surfers is the only operator with permit who leave directly from Tamarindo to Roca Bruja.

There is a few companies who have permits to go there, but they will take take you first on a drive to Coco and then on a boat ride (around 60min) to the surf spot.

There is a limit on the boats per day allowed by law in the bay depending on the season, so plan ahead and book to secure your spot.

This famous surf spot is known for its great barrels, not to mention for being one of the best beach breaks on the Nicoya Peninsula. Bonus: Playa Grande can have good waves even on days when other area surfing beaches are flat. Because of this, it can be a pretty crowded spot.

Playa Grande is great for intermediate surfers, has a sandy bottom, and offers lefts and rights on its beach break.

The best time to surf PlayaPlaya Grande all year long is from mid tide to high tide.

It’s fairly simple to get here. From Tamarindo, drive to Villarreal, turn left, and in Huacas turn left again. Then, follow the signs to Playa Grande.

You can also walk to the edge of Tamarindo and pay 1$ for someone to boat you across the estuary.

We don’t recommend to paddle across the river. Remember this is a national park so wildlife animals are at home here;).

The popular beach town of Tamarindo has several surf breaks that are relatively mild and offer great surfing for beginners and intermediates. There are few named breaks on this long stretch of beach, including El Estero de Tama, Pico Grande, La Punta del Madero and La Isla Capitan(Advanced). There are dozens of surf shops, and camps with board rentals and instructors. If this is your first time surfing, then Tamarindo is, hands down, the easiest town to start.

There’s great surfing here year-round for beginners. Prime surf time in Tamarindo is 3-4 hours before high tide. The town is full of surf shops and instructors who will tell you the best time to surf on a day-to-day basis, so just ask. People are friendly!

Tamarindo started as a beach town, but is now one of the most popular tourists destinations in Costa Rica. The Liberia International Airport is only 1 hour from town. If you plan on driving, there are many road signs leading from the airport to Tamarindo. Taking a shuttle is also very easy and popular. Many surfers get a hotel in Tamarindo and either surf here or book surf tours leaving from Tamarindo.

This beach is a favorite surf spot for locals. It’s a long beach with several different surf spots. It offers a full range, from advanced to beginner brakes. Some of the best surf breaks here include El Estero de Avellanas, Palo Seco, in front of Lola’s, La Purruja and Little Hawaii. Avellanas is often packed with intermediate to advanced surfers, but beginners can also find board rentals and surf instructors here most days.

You can surf in Avellanas year-round, both during the green and dry seasons. Waves are best in mid- to high-tide.

From Tamarindo it’s about a 30-45minutes drive(depends on the condition of the road) south to Avellanas, on a half-paved and then half-dirt road out to the beach. There’s parking by the popular local restaurant, Lola’s. Drive if you can, or take shuttle from Tamarindo.

Little recommendation, don’t leave your stuff on the beach without surveillance.

This famous wave was featured in Endless Summer so, while it’s still an epic wave, you should know it can get a little crowded. Playa Negra mainly offers big right waves and lots of barrel opportunities. It has a rock bottom and is therefore not suitable for beginners.

Most people surf during high tide. Surfing is good year round at Playa Negra.

From Avellanas, drive south about 5-10 minutes on the main dirt road. Once you pass the little bridge after the soccer field, take the first right. There’s a parking lot at Hotel Playa Negra and a paved walkway to the beach.

Frijolar is a fun beach break located about an hour south of Playa Negra.

In classic conditions, the waves are hollow with explosive barrel sections, but those conditions are rare because of wave’s high sensitivity to the wind and shifting sand bars. Marbella also have a poor ability to hold bigger swells.

According to local fishermen who constantly get the evidence stuck in their nets, the beaches between Negra and Frijolar are infested of sharks.

The reason for this is unknown, but the water in this area is oddly colored and has a fishy smell.

Most people surf during mid tide(4hours before) to high tide. Surfing is good year round at Playa Frijolar but best conditions are when high tide is in the morning.

By car, from Playa Negra, go south toward Paraíso and follow the signs to Marbella.

Count around 45 min to get there depending on the road conditions.

Guiones, is a Long Beach break that attracts a lot of swell.

Low tide is a bit better for short boards because the waves jack up on the sand bars and drive their way into the beach with a lot of push.

Long boarders and beginners usually prefers high tide as the waves become slower and softer (unless it’s big and this is not rare!).

This area of the Nicoya peninsula is not blessed with the consistency of the dry season offshore winds that strike Tamarindo, but when it happen, it creates epic surf conditions !

Guiones is also referred to as “Nosara” by the local gringos so be careful when you ask for directions. Real name is playa Guiones!

To get to Guiones by car from Tamarindo, you can drive on the road that goes along the coast but this road is often in bad shapes and you might have to cross a few rivers on the way in green season.

Expect around 2hours and this road is only recommended between December to June.

Otherwise, try the road through Nicoya, which will take you about the same time but on a paved road.

This area has some of the best beach break waves around. Waves are lefts and rights, with a mostly sandy bottom. It’s a fairly large beach village with plenty of good places to stay and eat.

Santa Teresa is located on the southern tip of the Nicoya Peninsula. It’s a long, bumpy drive drive down, so plan on staying a couple of nights.

BFit Retreat offers services from surf lessons to workouts and yoga, to full surf retreats. If you’re looking for an active surf vacation in Costa Rica that will be completely customized to your needs then contact BFit Retreat.

Get a custom trip plan made just for you by a Costa Rica travel expert. 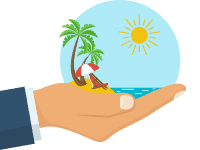 Get a Custom Trip Plan